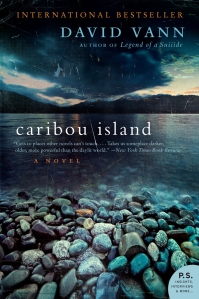 Publisher’s description: On a small island in a glacier-fed lake on Alaska’s Kenai Peninsula, a marriage is unraveling. Gary, driven by thirty years of diverted plans, and Irene, haunted by a tragedy in her past, are trying to rebuild their life together. Following the outline of Gary’s old dream, they’re hauling logs to Caribou Island in good weather and in terrible storms, in sickness and in health, to build the kind of cabin that drew them to Alaska in the first place.

But this island is not right for Irene. They are building without plans or advice, and when winter comes early, the overwhelming isolation of the prehistoric wilderness threatens their bond to the core. Caught in the emotional maelstrom is their adult daughter, Rhoda, who is wrestling with the hopes and disappointments of her own life. Devoted to her parents, she watches helplessly as they drift further apart.

Brilliantly drawn and fiercely honest, Caribou Island captures the drama and pathos of a husband and wife whose bitter love, failed dreams, and tragic past push them to the edge of destruction. A portrait of desolation, violence, and the darkness of the soul, it is an explosive and unforgettable novel from a writer of limitless possibility.

Being made into a film by two-time Academy Award winning director Bill Guttentag.

Selected by the Guardian Book Club in February 2015.

“Caribou Island gets to places other novels can’t touch. By the end, I felt the senseless logic of the dream. Though it wears the clothes of realism — the beautiful exactness of the language, the unerring eye for detail — it takes us someplace darker, older, more powerful than the daylit world. This Alaska with its salmon boats and trash dumps becomes a stage for ancient stories of survival and will and connection and love, and also, in the end, the failures of love.”—The New York Times Book Review

‘‘Everything that made Legend so absorbing, and rightly acclaimed, is here deepened and strengthened … As a portrait of stymied lives and broken dreams, it is more vivid than the most-praised novel of last year, Jonathan Franzen’s Freedom, which feels like a soap opera in comparison … Caribou Island is a novel of fine artistry and stark emotional truth — full of our darkest currents and faintest sounds’’—The Times (London)

“Whatever about the frenzied tootling that accompanied Jonathan Franzen’s doorstop Freedom, Caribou Island is a leaner, meaner and more devastatingly realistic portrayal of family relationships, couples and how life’s missed opportunities and regrets can curdle into something altogether more dangerous. And Vann might even be more worthy of the title ‘great American novelist’.”—The Irish Independent