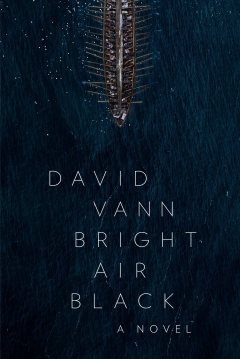 Amazon Best Books of the Month for March 2017

Barbara’s Picks, Library Journal, March 2017: “The multi-award-winning Vann’s sense of tragedy enfolded in the everyday is as dead-on as his gorgeously unflinching writing, which will come in handy as he recounts the myth of Medea. Vann does not offer a modern retelling, instead transporting us to third century BCE and the creaky ship Argo as it plows the Black Sea. Not surprisingly, Vann gives special voice to Medea, the sometimes mysterious center of the myth. Bound to make you shiver.”

“This Medea is intelligent and cynical, slighted by a husband and her gender. She is a woman who craves revenge for the fate of being born a woman and thus rendered powerless in a world ruled by men. Vann strips away the softer parts of Medea’s character as ruthlessly as Medea slits throats … The centrepiece of Bright Air Black is the butchering of Pelias, a long and magnificently gruesome scene, described in stomach-churning detail … Vann leaves us with the troubling paradox that murderous Medea is also a devoted mother … Vann evokes this visceral, sensual, brutal world of warring city states, capricious gods and fragile human agency in a fractured prose style, reminiscent of ancient Greek drama and poetry. Short poetic phrases pile up, fall away, stop short. Powerful internal rhythms build and subside, like the waves the Argonauts sail over … The time and the place may be very different from his previous novels, but Bright Air Black shares the same central structure of a searing family drama set against a backdrop of untamed nature … At the heart of this ambitious, dazzling, disturbing and memorable novel lies the uneasy juxtaposing of the wild and the civilised, and the complex, shifting relationship between the two.” – Rebecca Abrams, Financial Times

“[Vann’s] genius lies in his ability to blow away all the elegance and toga-clad politeness that have grown like a crust around our idea of ancient Greece and to reveal the bare bones of the Archaic period in all their bloody, reeking nastiness.” – The Times

“A retelling of an ancient tale, a retouched portrait of one of mythology’s most enthralling and notorious women, Medea … (Vann) gives us a ringside seat to a blood-soaked, viscera-dripping gore-fest. Vann gives us a fresh slant on an early myth, an up-close and in-depth character study. From the outset, his drama unfolds inprose that is both atmospheric and electrifying … Vann’s content can be grim but his language has beauty and poise … [A] stunning depiction of one of mythology’s most complex characters … The tale is also one of great power and intensity. Bright Air Black possesses the same potency. Its dark energy shocks us and shakes us, yet it is impossible to pull away.” – The Australian

“Vann’s prose in these chapters is a tour de force. Short, metaphor-rich present-tense sentences, often lacking finite verbs, convey with striking immediacy a world where the real and the phantasmagorical, the human and the divine, are intricately entwined…Vann’s evocation of a barbaric world lingers long in the reader’s imagination…a strong narrative line and as it approaches the terrible climax – Medea’s murder of her sons – a tautly sustained tension.  Yet, like Toibin, Vann manages to maintain the ancient, hieratic basis of the legend by means of careful control of tone and imagery, sparse use of dialogue and frequent echoes of the mythic opening section of his novel. A very fine achievement from a writer who should be far better known than he is at present.”  Andrew Riemer, Sydney Morning Herald

“Any reimagining of the Greek myth of Medea, she who helped Jason acquire the Golden Fleece from her royal father and killed her children in revenge after Jason betrayed her, will never be a cozy read, yet Vann’s (Aquarium, 2015) version is darker, edgier, and more discomfiting than most. It’s made up of prose incorporating both mesmerizing sentences and concentrated fragments. A priestess of Hekate with no use for kings, Medea must depend on them and other men for her survival, to her frustration and fury. While ambitious, Jason still needs constant prodding to fulfill the destiny Medea creates for him by means of sorcery, cunning, and blood. The Argo’s sea voyage from Colchis to Jason’s homeland of Iolcus feels overly drawn out, yet it allows for multiple opportunities to rework the traditional mythos in inventive ways—which often involve the characters indulging in their atavistic natures. The setting has an otherworldly feel at times, which heightens the sense of the tale’s ancientness. Sensual and violent, often simultaneously, Vann’s novel evokes the primal force of women’s power.” — Sarah Johnson, Booklist

“In a terse, gritty, elliptical style, Vann creates an all-engulfing portrayal of Medea, a single point of absolute, relentless focus, of almost claustrophobic darkness…Vann has clearly absorbed not only scholarship and theoretical approaches to antiquity, but has especially thought about and explored the attribution of symbolic roles to male and female gods, natural forces, landscapes and social conventions. He possesses a powerful mind, distinct diction, a formidably fecund imagination, as well as a very tactile awareness of language, narrativity, the art and craft of creative writing. In Bright Air Black, one cannot help but admire the scope of this venture into myth and reality, into violence and redemption.”  Mika Provata-Carlone, Bookanista

“[A] compelling study of human nature stripped to its most elemental.” – Observer

“His ambitious new version of an ancient classic” Kirkus

Following the success of Aquarium, which was a New York Times Editors’ Choice and garnered numerous rave reviews, David Vann transports us to the thirteenth century BC to give a nuanced and electric portrait of the life of one of ancient mythology’s most fascinating and notorious women, Medea.

In brilliant poetic prose, Bright Air Black brings us aboard the ship Argo for its epic return journey across the Black Sea from Persia’s Colchis—where Medea flees her home and father with Jason, the Argonauts, and the Golden Fleece. Vann’s reimagining of this ancient tale offers a thrilling, realistic alternative to the long-held notions of Medea as monster or sorceress. We witness with dramatic urgency Medea’s humanity, her Bronze Age roots and position in Greek society, her love affair with Jason, and her tragic demise.

Atmospheric and spellbinding, Bright Air Black is an indispensable, fresh, and provocative take on one of our earliest texts and the most intimate and corporal version of Medea’s story ever told.